Predicting the Status of Marijuana Legalization in U.S. States


For the past 20 years, marijuana legalization has gotten great deal of attention. In fact, and support for recreational use has risen steadily during that time: as of 2013, a majority of Americans support legalization. However, many states go through various stages before ultimately legalizing: the four stages are: prohibition, decriminalization, medicalization, and legalization.

Currently, it's become of critical importance to understand what leads to legalization and use that knowledge to help us predict the next U.S. state to legalize. We know that machine learning is used for . Therefore, inspired by Thomas Elliott's ML Drag Race exercise, I thought it would be interesting use ML algorithms to help us create predictive models for statewide recreational legalization.

Machine learning consists of families of algorithms for exploring data and predicting outcomes. In social sciences, because we often want to have more control over the analytical process than relying "solely" on algorithmic findings (e.g. statistical regression techniques), we would side with "supervised" over "unsupervised" algorithms. We use supervised algorithms when we know the outcome value or answer for a subset of our data. Supervised algorithms work by reading in a set of features (independent variables) and the label (dependent variable or outcome) and the algorithm works to figure out a solution from the features to the label. Compared to standard frequentist statistical procedures, the model (e.g. the equation from X values -- the independent variables -- to the y value -- the dependent variable) is not as important as it predicts the labels.


Logistic Regression Using a two-dimensional graph, the logistic regression (logit) uses a transformation of the straight-line (a logit function of the line or probability curve between 0 and 1) to separate groups of labels in a way that minimizes errors -- thus misclassifying the least number of cases.


Support Vector Machines SVMs attempt to separate out the groups defined by the labels using a line (or a transformation of that line) that maximizes the distance between the dividing line between the groups of labels. SVM has advantages over LDA (OLS-type regressions) in that, when dealing with data that can't easily be separated by a linear function, SVMs employ a "kernel" that converts the dataset into a function of itself, thus making it easier to come up with an equation for a dividing line between the groups of labels.


K Nearest Neighbors We can think of KNN as a sort-of correlation or network based technique where the algorithm reads in all the features, plots them in n-dimensional space, and identifies the number of "neighbors" that are closest. Thus, if the all specified nearest cases are of one label, then a specific case will also be given that label.

To predict whether or not a state (in the future) will legalize marijuana for recreational use, we need to study the data from the past. Here, I use cross-sectional state-level data (aggregated over time up until 2016). I randomly select 80 percent of the data on which to train the algorithms (the training data set) whereby the algorithms can learn their predictions, and 20 percent as the test set, on which the algorithm can test it's predictions (from the training set) and calculate how accurate it was. I then apply the most accurate algorithm to hypothetical cases. I use the following label and features, based on state-level factors and prior research: 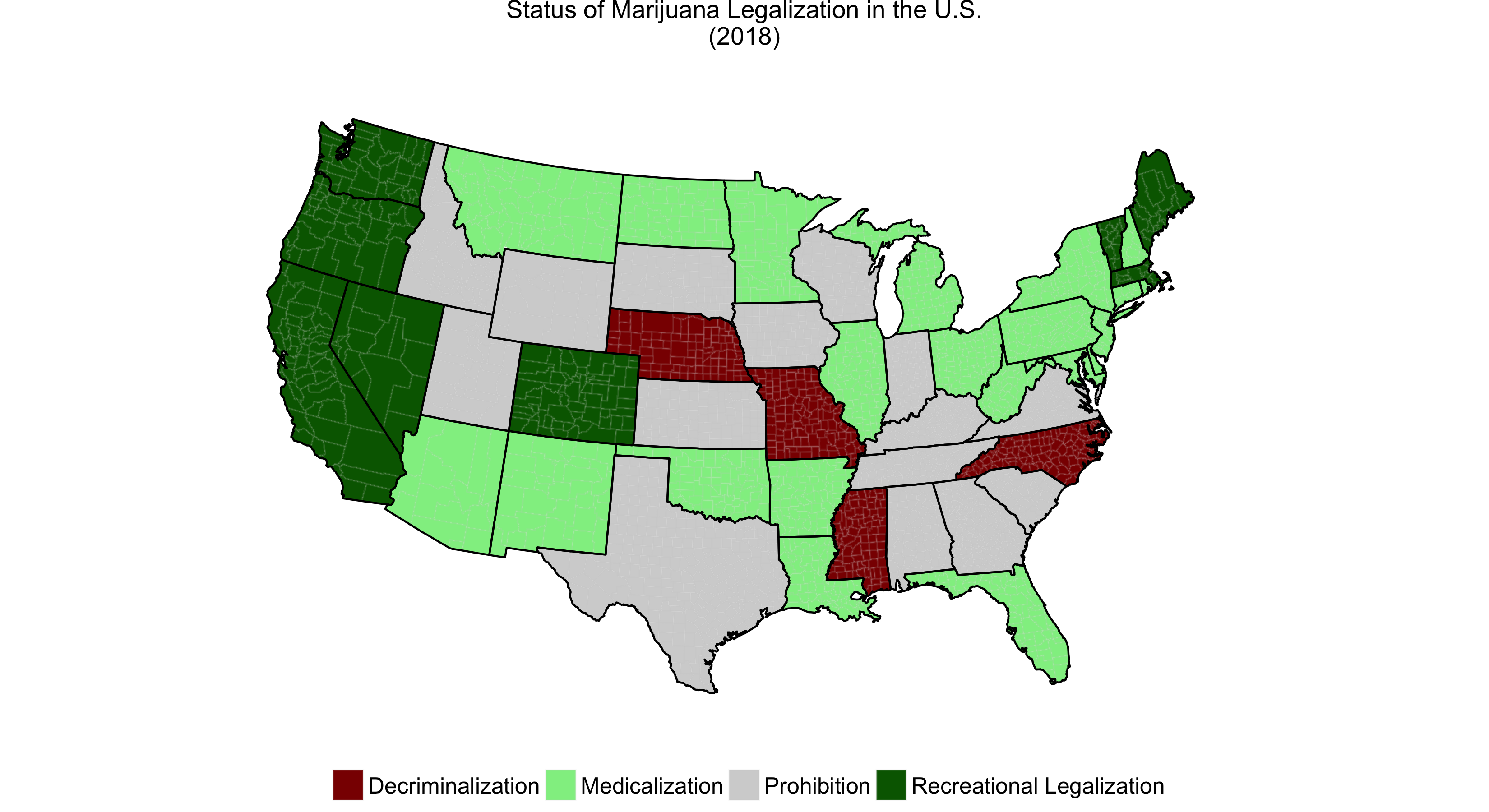 
Below, we see the accuracy for each of the algorithms.

We see here that K Nearest Neighbors is the best algorithm for predicting the label from the features. Given this information, we can predict whether a state, given certain features, is expected to legalize.

For a hypothetical state that voted for Barack Obama in 2008, allows the initiative process, and has had marijuana on the ballot five times, their features are as follows:
Therefore, the predicted status of legalization is: Click here to see the iPython Notebook